Everyone who saw this book on my coffee table picked it up. The subtitle is irresistible.

My favorite summary of The Righteous Mind is a quote from my dad. He has never read the book.

He said, “Morals are like shoes. Everyone has a lot of them, and they wear the ones that fit their needs or style that day.”

The central metaphor of the book is a rider (reasoning) and an elephant (emotions/intuition).

If the two disagree, the elephant wins.

There is too much in this book to talk about here. I will give a quick, modern example of how it changed the way I think.

This is simple and rational.

Then one day, I looked down at my phone and saw that the president claimed he was going to cancel student loans.

I thought, “How does the lender feel about that?”

The author, Jonathan Haidt, articulated and solved an issue I have dealt with my whole life.

If you think that moral reasoning is something we do to figure out the truth, you’ll be constantly frustrated by how foolish, biased, and illogical people become when they disagree with you.

But if you think about moral reasoning as a skill we humans evolved to further our social agendas — to justify our own actions and to defend the teams we belong to — then things will make a lot more sense.

Keep your eye on the intuitions, and don’t take people’s moral arguments at face value. They’re mostly post hoc constructions made up on the fly, crafted to advance one or more strategic objectives.

I re-read this quote at least ten times. I now look at every conversation through a different lens.

As a debtor, I can think of nothing more appealing.

If I, alone, tell the lender that I don’t want to pay my debt, he will look at me like I’m on crystal meth.

Now imagine an army of borrowers (or voters) saying they don’t want to pay their debts.

Here is the key insight.

Saying “Because I don’t want to” is a perfectly acceptable justification for one’s subjective preferences. Yet moral judgments are not subjective statements; they are claims that someone did something wrong.

I can’t call for the community to punish you simply because I don’t like what you’re doing. I have to point to something outside of my own preferences, and that pointing is our moral reasoning. We do moral reasoning not to reconstruct the actual reasons why we ourselves came to a judgment; we reason to find the best possible reason somebody else ought to join us in our judgment.

Basically, we feel a certain way about something (I want my debts forgiven) and then our brain comes up with reasons to support that feeling (University of Phoenix did something wrong. They mislead me into thinking I would have a good job when I graduated).

If other people like our reasons, we form a group. Groups of people make things happen.

If you want to change someone’s mind, talk to the emotions first.

Name things The No Child Left Behind Act.

Reasoning only works after the emotions and intuitions are ready for it.

At the bottom of the page is a diagram showing how people change their minds.

You can tell I think this debt forgiveness situation is a little goofy. Even if it is well-intentioned, it is effectively impossible to administer fairly.

Before reading this book, I would have been confused on how something like this gets ANY momentum.

From a cynical view, I have a better appreciation of how morality and emotions are weaponized.

From a less cynical view, I have a better appreciation of the sources of friction.

Although Haidt published this book 10 years ago, his writing anticipated this.

The source of friction in this example is the definition of fairness.

People supporting debt forgiveness likely view the original terms or outcomes of the debt as unfair.

People unsupportive of debt forgiveness likely think that it is unfair to treat some borrowers differently than others.

I hate to use the terms liberal and conservative because they distract everyone from any specific idea or issue under consideration.

However, if you are into that sort of thing, the book goes into the differences between liberals and conservatives, down to genetic influences.

Fairness is one of six Moral Foundations Haidt talks about (see below for the list).

Fairness is my favorite one because several of the others seem like gaps of misunderstandings that can be bridged if both parties are patient and looking to understand each other. The fairness one gets distilled to a situation like the above, where there is really no compromise.

Does fairness mean equality of outcomes or proportionality (people get what they deserve)?

In a sense, you already knew the answers to the test. Most people do not “Seek First to Understand Before You’re Understood” (Stephen Covey 7 Habits of Highly Effective People). In political, moral, and religious conversations, the most important question is usually, “Is this person having this conversation in good faith or is there an agenda?”

The Six Foundations of Morality

How People Change Their Mind 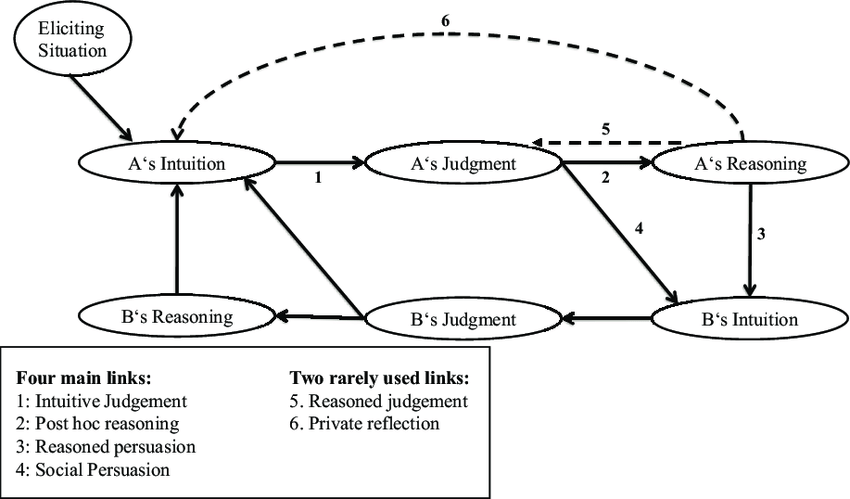 Thanks to James Bunch for reading drafts of this.